So, my weekly ‘adventure’ was more of a practical kind, attempting to fix prior mistakes. I fixed my iPod and attempted to fix my headphones.

See, a while ago I had this little mishap involving my iPod nano landing on the corner of the port where you stick your earphones in. Word of advice: do not attempt to insert iPod into armband sleeve while walking. Result: dent. Wise ass me decided to try to fix said dent using the jack (?) of my earbuds. Result: dent + broken off tip of earbud jack being stuck in port.
Really nice (and sort of handsome but not as handsome as TDH) guy tried to it it at the icentre, couldn’t. Told me to go to a shop where they could fix it, but to talk to Apple first, but to add myself falling with the iPod to my story. Apple can fix it for 100 euros. And the fixing shop works with appointments only.

And I randomly decided that I could fix it. I used a pair of round pliers to restore the dent. I tried using my normal tweezers to remove the earbud tip. Won’t fit. Using superglue-tipped toothpick resulted in the tip clicking into place. (Ah, now I understand how that bit of portable music equipment works! Those tiny silver lumps are both place holders and transmitters!!) Following a guy on YouTube’s fool proof advice using a pen cartridge – cutting right into ink of course- resulted in a tiny tube filled with superglue and a port with superglue but not the magical removal of the tip. Should have known better than to listen to a guy when it comes to these kind of things!
Brainwave! I have some tiny tweezers somewhere, which should be in my crafts supplies somewhere. Search for tiny tweezers, find them in my nail art kit. Remove superglue from port, remove tip from port.
Finish fixing dent.
Voila! It works! (Well, after replacing ear buds) 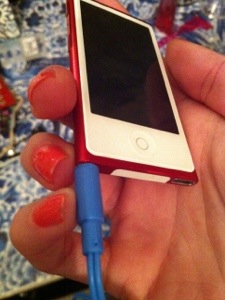 Then, as I was doing so well, I decided to fix my earphones which I’ve had for 4 years or so. They’re kind of vital when travelling but a wire seemed to be a bit lose somewhere where it goes into the ear bit. Result: now you have music, now you don’t! I did manage to remove the annoying piece of broken off plastic from the one earpiece, but when I opened up the other I found a red wire, attached, a common copper wire, attached and a but of paper tape (huh?) on the blue wire, which was not attached to anything at all. Apparently I’m the only one who tries to fix that problem, because google could only tell me how to fix it if it broke near the jack. Still don’t know where the blue wire goes!!!

Posted by busydarling on June 7, 2013 in ADHD, Adventure a week

New idea: I want to report about one fun, more or less adventurous thing I’ve done in a week, Fridays seem fair enough. Why? Always look at the bright side of life! -insert whistling here-

This week I took a friend to play mini golf…. In the dark using glow in the dark stuff. My inner child had a blast and I got to show off my special talent of missing really easy shots. I’m the girl whose ball jumps out of the hole again.

To top it off we got ourselves disoriented in a mirror maze. And we should have had blue ice cream too… But we were ready to grow up again after the maze.

Posted by busydarling on June 1, 2013 in ADHD, Adventure a week, Brilliant ideas